Volumetric fog allows the atmosphere surrounding your model to participate in the lighting calculation. Effects such as “sun streaks” or “light beams” can be accurately modeled using this effect. Tips on achieving both of these specific phenomena are discussed below. 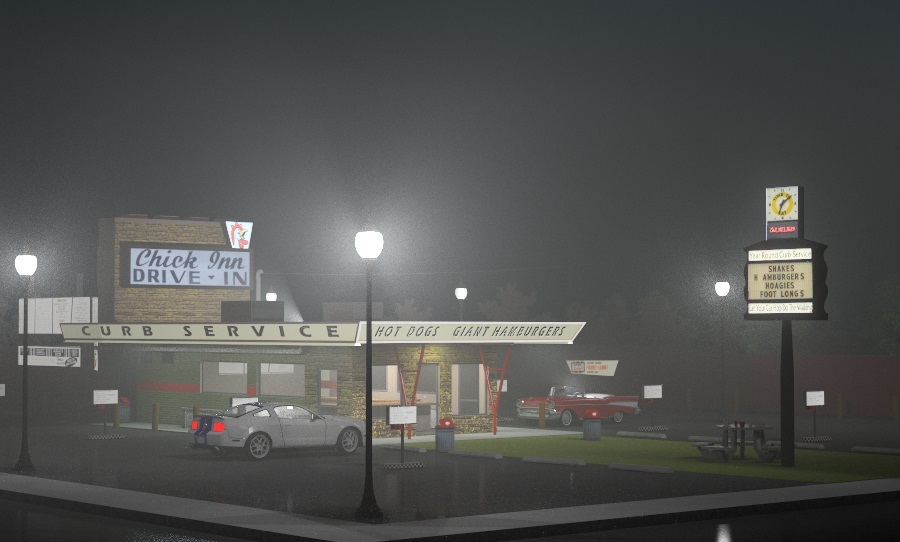 Nighttime fog scene - see Nighttime Fog Tips below. (It took about 1,000 passes for this rendering to converge and smooth out.)
Chick Inn Model courtesy of MuseumMaker - See: Sketching Ypsi

When we first used fog, we didn't see any either. We have fixed, or added warnings, for many of the thing we ran into. But this list may help.

This engine can create special effects like fog, but does so at the expense of a more complex and time-consuming calculation. The Path Tracer begins by displaying a very grainy or “noisy” image which gradually refines and becomes smooth. This process is known as convergence. Some scenes will converge very quickly, others will take many hours.

After just a few passes, the image appears quite noisy, but may be sufficient to determine if the scene is set up properly. I will usually take 100's 0r 1,000's of passes to get a good final image. Each pass is faster than with the Packet Mode Engine, but it will still usually take longer to get a useable result with the Patch Tracer. 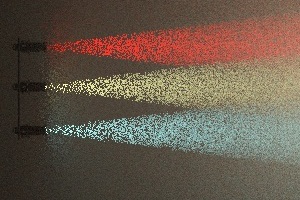 10 passes - early on the rendering has a lot of unresolved pixels. The final image is beginning to take shape but will need many more passes before it is complete. 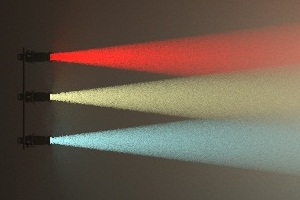 250 passes - you can see how this is going to work, and stop the rendering if you want to make changes. But it will probably take about 1,000 passes to get a good image with fog. 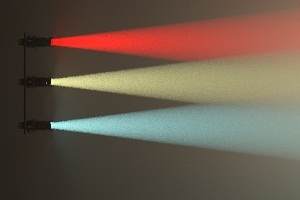 Use of the smoothness filters, included in IRender nXt, can also help resolve the image.

This two images are spot lights in haze, after 250 passes.

The one the left is the images as rendered, the one on the right has a 3x3 Gaussian Smoothness filter applied.

The smoothness helps converge the pixels, and the slight blurriness it adds is acceptable in a foggy scene. 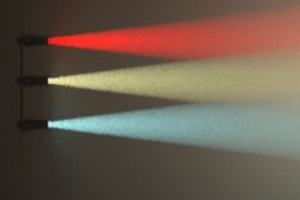 This is the same scene, rendered for 1,000 passes without a smoothness filter. The extra passes definitely create a smoother, more complete image. 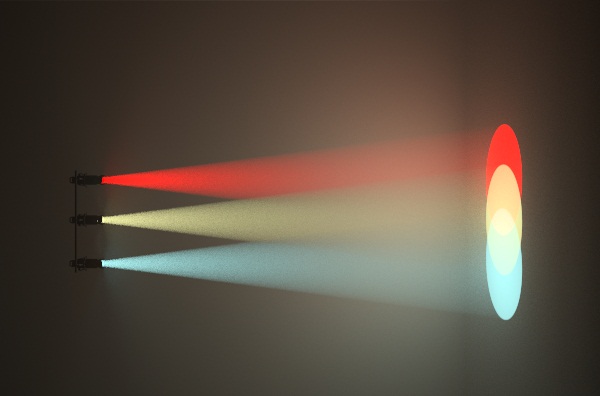 The Fog calculations require a boundary to determine where to apply the fog effect.

In this lighthouse example, the database extrema do not work well - because the database itself was so small: 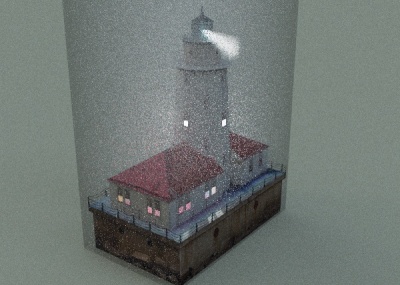 Boundary set to database extrema (plus 10%) after 50 passes. This does not achieve the effect desired. 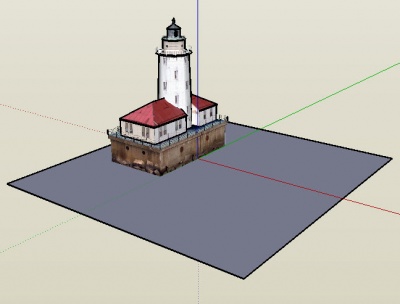 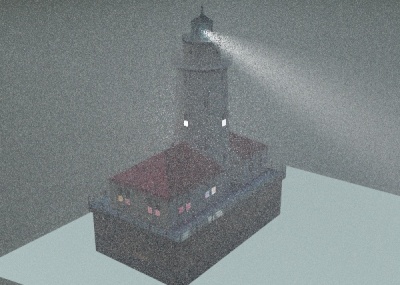 Boundary set to database extrema - with added area to define the fog boundary. 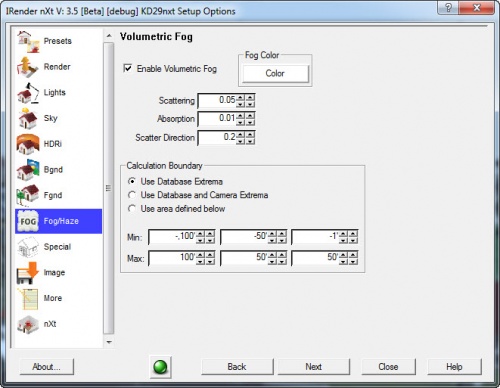 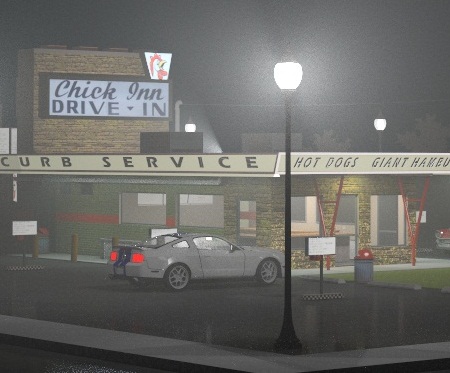 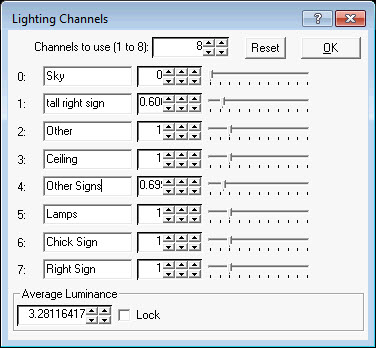 One of the other nice features for a nighttime scene like this was the use of Lighting Channels . I was able to assign separate channels to groups of lights, and then balance them while rendering and after the rendering was complete. This is much easier than having to change the intensity of the lights and re-render to see the effect. 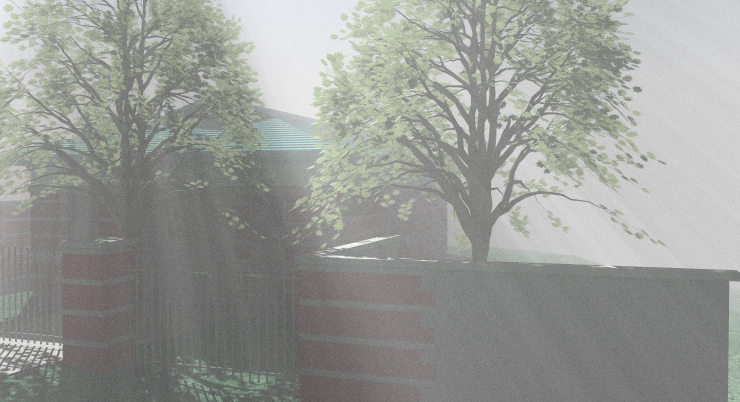 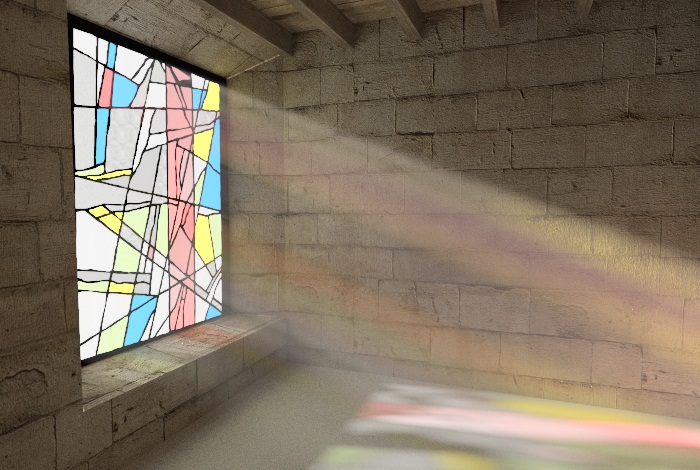 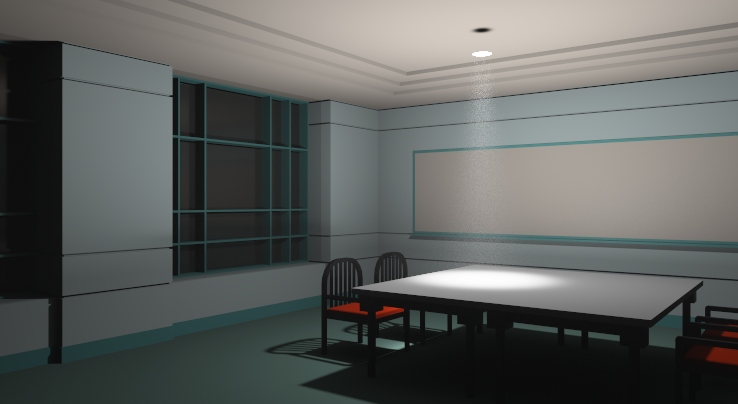